3M Dual-Ended Combat Arms™ earplugs were knowingly manufactured with a design defect for years. The company failed to disclose that defect, and a result, thousands of combat veterans may have sustained permanent hearing loss and injuries. If you were among them, you could be entitled to compensation. The Oklahoma City product liability lawyers of Cunningham & Mears are able and willing to represent you in a claim. Please contact us at your earliest convenience to learn how we can help.

These types of earplugs are known as “selective attenuation earplugs:” instead of blocking out all sound at certain decibel levels, the way regular ear plugs do, 3M’s earplugs were marketed as being able to block out varying levels of sound, depending on what the user needed. One side would allow a serviceperson to be able to hear speech; by flipping the earplug over, the serviceperson would able to block out speech and other sounds, giving him or her added protection. 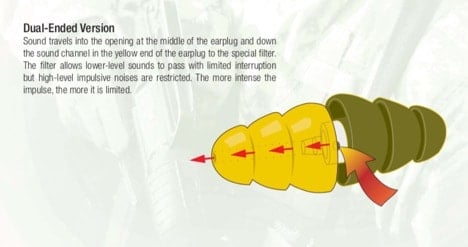 The Dual-Ended Combat Arms™ earplugs have a design defect: the stems were too short to fit properly into the ear, which means that, over time, the earplugs would loosen imperceptibly while in use. Because the seal was not tight, soldiers were exposed to higher decibels of noise than is safe, but were unaware of it.

As if this were not bad enough, Aearo/3M knew about this defect as early as 2000 – three years before it sold the product to the government. That was the year that the company retested its product, and found that the Noise Reduction Rating (NRR) of the closed end earplugs (the side that was supposed to block out the most amount of sound) was 10.9 decibels of sound, not the 22 NRR that the earplugs were supposed to provide.

They also found that when they tested the open end (the side that was supposed to allow users to hear speech), the plugs actually amplified sound. In response, Aearo/3M simply changed the test results and lied on the packaging. Then they continued to sell the product to the U.S. government, without disclosing any potential problems.

A competitor discovered the defect

The original creator of the Dual-Ended Combat Arms™ earplugs was Aearo Technologies. Aearo was, between 2003 and 2012, the exclusive supplier of selective attenuation earplugs to the U.S. military. (In 2008, 3M purchased Aearo and took over the contract.)

For years, 3M sold its Dual-Ended Combat Arms™ earplugs to the Defense Logistics Agency (DLA), a support agency under the Department of Defense that handles the military’s supply chain. DLA purchased an untold number of these earplugs for combat personnel serving in the Army, though U.S. Marines also used the product.

Moldex-Metric is another company which manufacturers earplugs, and a competitor of 3M. In its attempts to create an earplug that could be sold to the government, it discovered a defect in the design of the earplugs. Upon this discovery, the Moldex-Metric filed a qui tam action under the False Claims Act, blowing the whistle on Aearo/3M’s continual defrauding of the U.S. government.

It was this qui tam action, and the resulting lawsuit, that led 3M to pay $9.1 million to resolve the claim – with the understanding that by doing so, it was not an admission of guilt by 3M.

Filing a lawsuit for injuries from defective earplugs

If you sustained injuries because of defective 3M earplugs, you can make a claim for damages. In order to be eligible, though, you must have:

If you served during any of the following operations, you may have been using 3M’s defective earplugs without even knowing it:

Will a lawsuit affect my disability?

No, it should not. If you currently collect partial disability benefits, or have been issued a hearing aid by the VA, you can still make a claim for additional compensation.

How much will filing a lawsuit cost me?

Nothing. Cunningham & Mears takes all injury cases on contingency. This means that our fee is contingent, or reliant, upon you winning your case. Here’s how that works:

How long will it take before I get a settlement for my injuries?

While we will always work as quickly as we can for you, it may take a while for your claim to be paid out. There are potentially thousands of men and women who will make claims for their injuries, and multi-district litigation (MDL) is already forming to help move those cases throughout the court system.

This is why you should speak with our Oklahoma products liability lawyers as soon as you can. The faster we can submit your claim, the faster we believe we can help you secure the compensation you need.

How much is my case worth?

There is no way to determine exactly how much a case is worth without speaking to you first, because every client’s case is different. Generally speaking, in product liability cases, the more severe your injury the larger your compensation package is likely to be. Our firm can help you claim compensation for any of the following which apply to your specific case:

Because 3M knowingly committed an act of fraud, which means they knowingly deceived both servicepeople and the U.S. government, you may be entitled to additional punitive damages, as well.

Why Cunningham & Mears is the right choice

There are a lot of Oklahoma City injury lawyers out there, and choosing one can be a bit overwhelming. At Cunningham & Mears, we do our best to make the process as simple and as easy for you as we can. For the last 23 years, we have been sitting down with our clients one-on-one to find out what their needs are, and what we can do to help.

We will coordinate with your doctors, make sure your paperwork is filed correctly and on time, and answer all of your questions. You will always work with an attorney from our firm, and it will be the same attorney each time you meet with us. If you are looking for a law firm with the resources to handle your case, and a track record of success, give us a call. We’re ready to help you and your family move forward.

Did you use defective 3M Dual-Ended Combat Arms™ earplugs?

If you were stationed at Fort Sill Army Base or McAlester Army Ammunition Base, and were deployed between 2003-2015, you may be entitled to compensation if you suffered hearing loss or injury because of defective earplugs. Cunningham & Mears is currently accepting cases on behalf of Oklahoma veterans. To learn more about our services, or to schedule a free consultation with our team, please call 405-232-1212 or fill out our contact form.