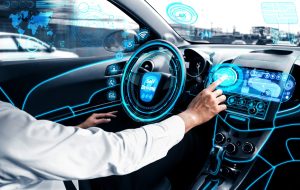 The future waits for no one and happens way faster than anyone expects. What was science fiction only 10 or so years ago now actually exists — cars that drive themselves! It has long since been a dream to be chauffeured safely around by your car, allowing you to nap and stream and chat to your heart’s content on your daily commute, so it’s no wonder so many people are excited. However, as cool as it is in theory, we now have to reckon with the real-world consequences of fantasy-world technology. There’s no magic or hand-waving writers, here.

All this is to say, driverless cars are not the infallible tanks we imagined them to be. They are vehicles with incredibly new technology that is still being tested and understood, and they are made out of the same, crushable metal as every other car. Accidents can, have, and will happen, especially as autonomous vehicles are becoming street legal in more and more states, including Oklahoma. Because much of the technology behind these vehicles is still in its infancy, enforcing safety standards and regulations can be life-saving measures. Drivers in “driverless” vehicles need to have laws to follow and consequences to worry about in order to encourage safer, more cautious actions, no matter how autonomous they want their cars to be.

Why regulating self-driving vehicles is so important

Integrating a new, revolutionary technology into modern society is not an easy task by any means. We don’t yet know how it will actually affect people, for better or worse, or how it will impact our economy and overall lives. While this is the nature of learning and discovering, it means that there’s a decent span of time where newer inventions have no laws or regulations surrounding them at all. Quite literally, anything goes, even if other aspects of the invention are regulated. A lack of oversight leads to, well, oversights. Easy mistakes that could’ve been prevented, accidents that didn’t have to happen — if no one knows what to prevent, no one can prevent anything.

Autonomous vehicles are a model example of this. Since their inception, they’ve only been bound by regulations pertaining to their non-autonomous features. Manufacturers had an incredibly dangerous amount of liberty aside from that, such as the Tesla’s infamous “rolling stop” feature at stop-signs, that founder Elon Musk confirmed was indeed programmed on purpose. It’s not that the company is “evil” or did it to cause harm, but as previously stated, you don’t know what you don’t know. Autonomous controls were tests and theories meant to poke and find weak points naturally, but those weak points made themselves known by way of accidents and collisions. Obviously, this is not an ideal way to test such new technology.

This is why the NHTSA recently updated their occupant protection standards to contain language specific to autonomous systems and vehicles. It clarifies “what is required of manufacturers when applying the standards to ADS-equipped vehicles without traditional manual controls,” and it sets a precedent for future and more in-depth laws and regulations as we learn and develop the technology further. It is only a first step, but undoubtedly an important and historic one.

Why autonomous vehicles can be more dangerous

Manufacturers and potentially overzealous technology can’t take all the blame, even where autonomous vehicles are concerned. Believe it or not, a staggering 99 percent of all driverless car accidents have been caused by human error — namely, the human in the car and the behavior of those around them. Humans expect robot drivers to behave like humans, which means potential actions like gunning it for a turn, speeding up for a yellow light (do not do this), and other risky shortcuts meant to cut down on commute time. Unfortunately, the other humans around don’t realize this until they’re speeding towards a vehicle that’s very firmly not trying to beat the light, and then the inevitable happens – a serious accident.

On the human in the autonomous vehicle’s part, relying too heavily on the technology and taking their attention entirely off the road can prevent them from catching any mistakes or emergency situations, and engaging the manual controls to swerve around a rogue pedestrian or other obstacle.

Human error has been the biggest cause of car accidents as long as they have been around. We’re not perfect, and we’re as prone to genuine mistakes as we are to careless risks. For those of us who haven’t been involved in major car accidents, it’s easy to have a false sense of security when driving and an over-inflated sense of one’s driving skills. However, it only takes one miscalculation to cause catastrophic collisions. Sadly, Oklahoma drivers are more aware of this than anyone. In 2021, our state alone lost 700 lives in car accidents — the highest number of fatalities here since 2012.

What to do after an Oklahoma City car accident

Staying vigilant and cautious on our roads has never been more important, and if you are injured in an Oklahoma City car accident due to someone else’s careless and reckless driving, you should know the right steps to take to protect your rights and ensure proper compensation:

Once these steps have been completed, the best thing you can do for yourself is contacting a skilled personal injury attorney to help build and strengthen your case. Having someone who knows how to deal with greedy insurance companies and slippery responsible parties means you can take time to rest and recover without worrying about any steep financial impacts. Whether the vehicle that caused your accident is autonomous or not, all negligent parties involved can still be held accountable with strong, aggressive representation on your side.

The experienced Oklahoma City car accident attorneys at Cunningham & Mears are ready to work tirelessly to prove another other party’s negligence caused your injuries. We keep you in the loop every step of the way while shouldering the hard work so you don’t have to think about it. After something as traumatic and stressful as a car accident, the last thing you should be worrying about is being able to afford your recovery. To learn more about what we can do for you, call us today at (405) 232-1212 or use our contact form.