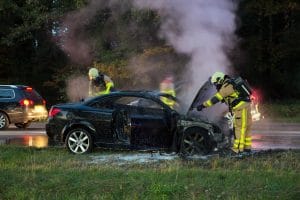 Watch a movie or a TV show involving a car crash and you’ll focus on how the cars crush each other. You’ll see pictures of the victims, expect the calls for ambulances, and wait for the police to arrive. All of these observations are heart-breaking but there’s one observation that raises the dramatic level to the extreme – when the car bursts into flames.

Cars igniting into flames couldn’t be scarier, and they happen more often than you might think: there were more than 181,000 reported car fires in the US in 2019 alone. The drivers in the vehicles often die. If they’re lucky to survive, the burn injuries can change their lives forever. It’s hard to know which is more traumatic – the physical scarring or the emotional scarring. When deaths occur, our respected Oklahoma City injury lawyers file wrongful death cases on behalf of the families of the survivors. We file personal injury claims on behalf of survivors.

Why do car fires happen?

Most car fires start as a result of a collision, either with another vehicle or a stationary object. Sometimes, the force of the collision is enough to spark a fire. Sometimes, it is a defect in the car that leads to a fire, even if there was no collision: Kia, Hyundai, BMW and Tesla have all been in the news over the past few years for spontaneous fires. Some of the more common causes of fiery car crashes include:

What are the common types of vehicle fire injuries?

Burn injuries are the most common type of car fire injury. Second and third-degree burns are very likely. According to the Mayo Clinic:

Other injuries include broken bones and fractures, smoke and ash inhalation leading to respiratory failure, esophageal burns, and/or lung damage, and retina injuries, and infection from the open wounds. In the very worst cases, the people in or around the car will die.

What kinds of surgeries may be required after a burn injury from a car fire?

In addition to many self-care and hands-on treatments such as dressings, ointments, fluids, and drugs to reduce the risk of infections, car accident burns are likely to require surgery. Those surgeries may include:

Burn injury victims usually need to work with many different therapists including physical, rehabilitation, and vocational therapists. In order to scope with the scarring and disfigurement, most burn injury victims often need to treat with psychologists.

What do I do if I think my vehicle is on fire?

As the old saying goes, where there is smoke there is fire. As soon as you see smoke or flames, you should pull off to the side of the road (the right shoulder if there is one is preferable). You should turn off the vehicle. You should then get out of the car and make sure there’s some distance between you and the car; a hot enough fire can (and will) shatter windows, and even though vehicle windows are made with a special type of glass, you want to be on the safe side. Call 911 to report the fire and give emergency fire services crews your location so the crews can put out the fire.

At Cunningham & Mears, our Oklahoma City car accident lawyers fight to hold manufacturers, distributors, and car retailers liable when defective car parts cause deaths or injuries. We file claims against drivers and owners if their negligence causes any passengers in their car, the occupants of any other cars, or bystanders to suffer death or burn injuries. We demand compensation for all your medical expenses, any wage or income loss, and the damage to your vehicle in car accident cases. When fires occur, we also demand compensation for your incredible physical pain and emotional suffering, and for your scarring and disfigurement. In many car accident cases, we negotiate just settlements with the insurance carriers for the responsible parties. When necessary, we’re ready to try your case before a jury of your peers. To discuss a wrongful death case or a personal injury case, call our seasoned Oklahoma City lawyers at 405.232.1212 or fill out our contact form to schedule an appointment.