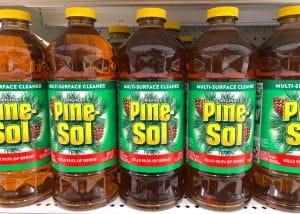 Pine-Sol, the popular multi-surface cleaner which claims it “cleans and disinfects so many surfaces, even the kitchen sink,” is facing a recall because of possible bacterial contamination. The cleaner is manufactured by Clorox – the first brand most people think of when they think of bleach – and affects about 37 million bottles of product.

According to CNN Business, “some of the affected Pine-Sol products might contain a bacteria called Pseudomonas aeruginosa,” and it may be especially harmful to people with compromised immune systems or “external medical devise.” The product is sold throughout the country by retailers such as Walmart, Amazon, Target, Dollar Tree and Kroger. Look for date codes beginning with the prefix “A4” and followed by a five-digit number less than 22249, to determine if your own bottles are affected. You can request a refund here.

The very good news is that there are no reports of a single person being harmed by the cleaner – at least, not yet. But this is the latest in a long line of recalled products for potential contamination. In August, Lyons Magnus recalled 53 different beverages because of a risk of contamination from Cronobacter sakazakii. Cronobacter is the same bacterium which prompted the baby formula recall in February this year. Milk of Magnesia was recalled in March because of microbial contamination.

In fact, of the dozens of medical product recalls this year alone, many of them were due to contamination by bacteria, microbes, particulate matter, and the presences of chemicals and compounds such as benzene (which may cause cancer) and sildenafil (the primary chemical in Viagra).

Why are there so many dangerous, defective products for sale?

There short answer is, because companies put their profits ahead of their consumers. The long answer, however, is that there are a lot of reasons why dangerous, defective products make it to market. Some of them include:

Reliance on outdated testing and development

A large portion of drugs and medical devices have to go through rigorous testing before they can make it to market – unless they can use a legal loophole called the 510(k) premarket submission. This process was designed to help manufacturers with products that are “substantially equivalent” to other products get approval for sale. So if you make Widget A and it’s on the market, and now you want to create Widget B, which is almost exactly the same as Widget B but slightly smaller, you don’t need to go through the same years of testing and design; you can submit your product through the 510(k) process to speed things up, because there is already an existing, or “predicate,” device on the market.

The problem is that some of the predicate devices later prove to have flaws, or are recalled or removed for various reasons. But under the rules, manufacturers can still go through the 501(k) process using a faulty, dangerous predicate product. That is how we ended up with hip and knee replacement systems that literally leaked cobalt into people’s bodies, leading to heavy metal poisoning.

The Food & Drug Administration (FDA) is supposed to keep an eye on manufacturers to ensure that their products are safe for the public to use. But the reach of the FDA doesn’t extend across the ocean. As such, it has no control over how international manufacturers and compounders run their buildings or manufacturing plants. When Valsartan was pulled from the shelves in 2018, it was because the FDA found N-nitrosodiethylamine, a toxic chemical, in the medication once it got here. The agency can’t inspect overseas factories.

Note: the one thing FDA has no jurisdiction over is cosmetics. These companies don’t have to register with the FDA nor follow their best practices.  What the FDA can do is request a “voluntary recall” of what it believes are dangerous products. That’s why the FDA could legally stand idly by while Johnson & Johnson pumped out talcum products with asbestos in them.

Not every company is honest

If you want an example of a company putting its profits first, look no further than 3M. Their defective Dual-Ended Combat Arms™ earplugs costs untold numbers of servicepeople their hearing. Most companies don’t set out to defraud the American public and the federal government, but some do:

If there’s one thing to take away from these examples, though, it’s that “they were wrong” is a common refrain; in each and every one of these cases, the truth DID come out, and juries found for the plaintiffs (or victims) in all of them. These companies employ teams of attorneys to protect themselves; if you were injured by a defective product, an Oklahoma City product liability attorney can help. Our attorneys have handled defective 3M earplug claims, and will fight to protect you if you have been harmed by:

At Cunningham & Mears, we represent individuals and families who have suffered losses and injuries as a result of dangerous products. Let us help you, too. Contact us today in Oklahoma City to schedule your free consultation.