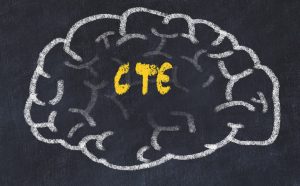 Protective helmets and pads are essential in contact sports such as football to protect the health of players. However, helmets can only do so much when athletes hit each other, and do so repeatedly at high contact speeds. Sometimes a player may not only experience on concussion, but repeated concussions. The effect of such repeated injury to the head can be devastating, resulting in condition referred to as CTE – chronic traumatic encephalopathy.

After sustaining one concussion, the risk increases for sustaining others in the future. The effective of multiple concussions can result in CTE as mentioned above. This is a degenerative brain condition and it carries multiple symptoms, such as:

Some scientific researchers have suggested that biomarkers exist prior to the 8 to 10 year mark that justify making an official CTE diagnosis before the victim’s death. Although this is still under examination, the medical community is confident about blood tests that can identify early clues for making an earlier CTE diagnosis. At the same time, many football players are dealing with heavy burdens right now as they try to manage the symptoms of CTE and dealing with life without a medical cure.

Athletes who play contact sports such as football, including young players prior to the college years and professional athletes are subject to being diagnosed with traumatic brain injury and CTE. Victims of this condition also include those subjected to repeated domestic violence, with a history of violent or chronic seizures, and working in the military. Sports other than football that can precipitate a condition of CTE include ice hockey, rugby, soccer, boxing, and wresting. However, professional football has seen more of these cases than any other sporting activity.

A common risk for developing CTE is the repetitive head injury. These injuries are invisible externally – there is no apparent bleeding involved. Concussions which are blows to the head are the most significant cause of CTEs. However, the medical field has discovered that sub-concussive impacts to the head that do not result in obvious physical symptoms or discomfort can also contribute to CTE disease. Currently, there is no medical cure and no designated treatment for CTE.

The NFL and CTE

In recent years, the topic of concussions and CTE in the NFL has permeated the news. Back in 2011, thousands of former NFL players filed a class action lawsuit against the NFL regarding numerous health issues former players have suffered as result of repetitive concussions. A settlement was finalized in 2015 to help treat former players suffering from these injuries.

Traumatic brain injuries resulting from sporting activities such as football, or for any other cause, can lead to serious, life-changing consequences for the victim. If you sustained an injury to the head or have symptoms of CTE as a result of repeated concussions while play organized football, you or your child may have the right compensation. Our Oklahoma City traumatic brain injury attorneys at Cunningham & Mears can help. For a free consultation, call us today at 405.232.1212 or fill out our contact form and send us a message.