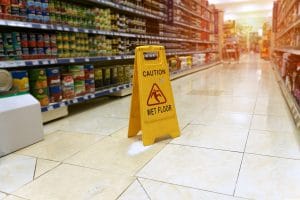 Oklahoma has suffered through some wretched weather this past year, including a couple of brutal ice storms. With snow and ice comes slippery surfaces for vehicles and people. If you slip and fall on that ice, you could face some hefty medical bills.

But what about if you slip and fall on someone else’s property, like your neighbor’s house or the local grocery store? Surely you can make a claim against their insurance to cover the costs of your bills, right? As it turns out, that’s not always the case here in OKC. It all has to do with whether or not you fell on a natural, or unnatural, accumulation of ice.

Unnatural accumulations are ones caused by people. Some examples include:

In this cases, the property owner can be held liable for your injuries because the unnatural accumulation of water, ice, snow, or other hazardous element created dangerous conditions.

In 2014, the Supreme Court of Oklahoma ruled in favor of Erica Wood, who “sued Mercedes-Benz of Oklahoma City for injuries she suffered after she slipped and fell on ice that had accumulated on sidewalks, pavement, and grass surrounding the Defendant’s automobile dealership.” The dealership’s sprinkler system turned on during a deep freeze and created the icy conditions. The court found “Mercedes-Benz had a duty to take precautionary measures with regard to the sprinkler system particularly in light of cold temperatures and pooling water caused by the system. Furthermore, there was a question of fact regarding whether Mercedes-Benz breached its duty toward Wood.”

There are exceptions to the rules regarding invitees

Typically, invitees – guests in your home, shoppers at a store, or other people who have a legal right to be in a place – are owed a duty of care by any property owner. However, what constitutes an invitee is not always set in stone.

In Buck v. Del City Apartments, Inc. a couple staying at the motel sued for damages when the wife slipped and fell on icy steps entering the cabin the couple rented. The couple claimed they held “guest” (invitee) status, which would have meant that the property owner owed them a duty of care in maintaining the safety of the premises. The couple alternatively argued that the woman was a tenant and the area where her injury occurred was essentially a common area that the landlord has a “duty to maintain in a reasonably safe condition for the use of his tenants.”

The motel owner argued that the wife slipped on the steps to the cabin, which was under the couples’ exclusive control, and therefore no obligation fell on the part of the owner to make the steps safe. The owner’s argument was supported by the rule that “absent fraud, concealment, deceit or an express covenant of warranty of fitness for human habitation, the landlord is not liable to a tenant (or to the members of his family) for injuries due to the defective condition or faulty construction of the demised premises, where by the terms of the lease the control over such premises passed ‘entirely and exclusively’ to the tenant.” In short, if you’re under a lease agreement, you are responsible for the making obvious dangerous conditions safe for yourself and your guests.

The court determined that the woman’s status as an invitee did not afford her the protection she was seeking as an injury victim stating that “[t]he owner or person in charge of the premises has no obligation to warn an invitee, who knew or should have known the condition of a property, against patent and obvious dangers. The invitee assumes all normal or ordinary risks incident to the use of the premises, and the owner or occupant is under no legal duty to reconstruct or alter the premises so as to remove known and obvious hazards, nor is he liable to an invitee for an injury resulting from a danger which was obvious and should have been observed in the exercise of ordinary care.”

Mere slipperiness of ice and snow in its natural state and accumulations does not give rise to liability. However, there may be times where a condition on someone’s property does provide you with a cause of action for slip and fall. To learn more, speak with the Oklahoma City premises liability attorneys at Cunningham & Mears today. To schedule your free, no-obligation consultation in our office call (405) 232-1212, or we invite you to reach out to us through the firm’s contact page to tell us your story.