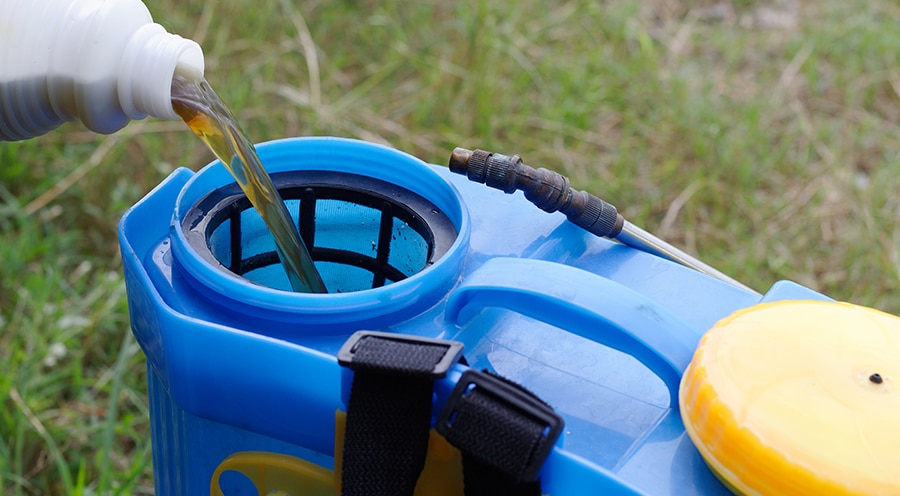 If you developed Parkinson’s from herbicide exposure, contact us today

The herbicide paraquat (Gramoxone) has been linked to the development of Parkinson’s disease, and excessive exposure to this dangerous chemical can increase that risk. Cunningham & Mears is currently reviewing cases on behalf of people who were exposed to paraquat weed killer and developed signs of Parkinson’s. We urge you to contact our product liability lawyers in Oklahoma City today if you need help.

What is paraquat, exactly?

Paraquat is a highly poisonous and toxic chemical used for weed and grass control. Per the Centers for Disease Control and Prevention (CDC), paraquat is dangerous enough that the “US Environmental Protection Agency classifies paraquat as ‘restricted use.’ This means that it can be used only by people who are licensed applicators.” To ensure that its toxicity is well-known to users, the US government requires manufacturers to add both artificial coloring and odors, so it is not confused with another, safer liquid. Manufacturers must also include an agent which will induce vomiting in case of accidental ingestion.

Why is paraquat dangerous?

Like many toxic chemicals, there are short-term and long-term exposure risks associated with the herbicide paraquat.

Immediate exposure to paraquat will induce vomiting, diarrhea, and nausea. It can also damage the mouth, throat, lungs, stomach, and intestines. Short-term exposure symptoms can include:

Ingesting even a small amount of paraquat can be fatal. There is no not antidote for this deadly chemical, per the CDC.

If a person survives paraquat exposure, the damage can be long-term and, eventually, fatal. Organ scarring is likely, as is organ failure.

Another long-term risk of paraquat exposure is the development of Parkinson’s disease (PD).

What is Parkinson’s disease?

Parkinson’s is a progressive nervous system disorder. It affects a person’s mobility and can cause tremors, shakes, muscle rigidity, slowed movement, posture, speech, and fine motor skills. It is an incurable disease.

Parkinson’s causes the neurons in the brain to break down and die, which decreases the amount of dopamine that is released into the body. This affects multiple systems in the body, and the effects get progressively worse as time goes by.

Is there a link between paraquat and Parkinson’s disease?

This link between exposure to herbicides like paraquat and PD is well-documented by experts. A 2009 article published in the American Journal of Epidemiology reviewed the data surrounding exposure to maneb (a fungicide) and paraquat. The authors found:

Evidence from animal and cell models suggests that pesticides cause a neurodegenerative process leading to Parkinson's disease (PD)…. Exposure to both pesticides within 500 m of the home increased PD risk by 75%.... This study provides evidence that exposure to a combination of maneb and paraquat increases PD risk, particularly in younger subjects and/or when exposure occurs at younger ages.

Since the publication of that study, numerous other organizations and journals have published data about the link between PD and paraquat and herbicide use. A 2020 report published in Environmental Health “found an increased all-cause mortality risk in PD patients with occupational exposure to pesticides.”

Is the government doing anything to address the issue?

It is now. In 2016, the EPA began reviewing the adverse effects of paraquat, which led the agency to change who could access, mix, and apply paraquat. (Before 2017, you did not need to be certified to apply paraquat; you merely needed to be “supervised” by someone who was licensed to mix and apply it.) Also in 2017, the Unified Parkinson’s Advocacy Council, which is led by the Michael J. Fox Foundation for Parkinson’s Research, has urged the EPA “to deny the reregistration of this herbicide based on strong evidence of paraquat’s harm to human health.” In 2020, legislation was introduced in Congress that would require the EPA “to cancel the registration for all uses of the pesticide paraquat and to ban paraquat residue on food,” and prohibit the use and sale of any “existing stock of paraquat.”

Who is at greatest risk of injury from paraquat?

Because paraquat cannot be applied unless the applicator is certified to use it, it is sold to and used by commercial industries. That puts workers, owners, and operators at greatest risk of paraquat exposure. The following industries are at greatest risk:

Warehouse workers, farmers, employees transferring paraquat form one part of the property to another: everyone is at risk of exposure. So, too, are people who live and work on neighboring properties, even if they do not use paraquat. There is a risk that the chemical can drift into neighboring areas.

What are my options if I was exposed to paraquat?

If you were exposed to paraquat and have developed signs of Parkinson’s disease, you may be entitled to damages. The Oklahoma City product liability lawyers of Cunningham & Mears are ready to help you file a lawsuit against the manufacturers of this deadly chemical. You can make a claim for damages for your:

If your loved one died as a result of paraquat exposure, a wrongful death lawsuit may allow you to claim damages for burial and funeral expenses.

In the meantime, you may be entitled to workers’ compensation or Social Security Disability, which can help alleviate some of the financial burdens associated with your illness. We can talk to you about your options and recommend trusted workers’ comp and Disability attorneys to help you collect your benefits.

If you are ineligible for workers’ compensation or Disability, or if your medical costs are higher than what those government programs can provide, Cunningham & Mears can help you plan your next steps. We have represented claimants in individual claims as well as those considering joining an MDL.

If you were exposed to paraquat and have developed Parkinson’s disease or another neurodegenerative condition, let us fight for you. Cunningham & Mears represents clients throughout Oklahoma in product liability claims. To schedule a free consultation, please call 405-451-5105 or fill out our contact form.