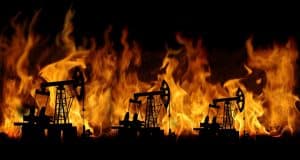 Station KGOU (an Oklahoma NPR affiliate) recently conducted an interview with Sarah Terry-Cobo, a senior reporter for the Journal Record, about her story on a special group of oil field workers, known as “Hellfighters.” Hellfightersare frequently called in to handle well explosions.

Ms. Terry-Cobo explained that a great deal of training is required to respond properly to oil explosions, a common oil drilling risk. The hellfighters are petroleum engineers. They need at least 10 years’ experience drilling gas and oil wells. The next step is to show they can “repair, clean, and maintain the blowout preventer equipment.” After additional training, the worker is called to observe how experienced workers extinguish the hellfire.

The first hellfighter, according to Terry-Cobo, was a man named Paul Neal “Red” Adair. Adair started his own company in the 1950s and was well-known for putting out a dangerous fire in Algeria in the 1960s.  John Wayne portrayed Adair in the movie of the same name – Hellfighters.

Adair’s team blew up dynamite inside the wellbore, which starves the fire from the oxygen it needs. Now, customized machinery is used to “direct the heat away from the fire.” An initial determination is made whether the well is capable of being repaired or if it should be “cemented and closed.”

Terry-Cobo explained that she spoke to an engineer for Boots and Coots, the company that recently put out a major fire in Quinton, to learn the current technique. She explained the proper procedure steps:

There’s a lot of science and math need to determine how much mud/dense fluids must be used.

Terry-Cobo says that the Hellfighters are concerned that there may not be enough workers who can put out future fires due to retiring workers and a lack of supply of new workers with enough experience.

The best strategy is to reduce the likelihood of well fires in the first place. Oil workers are in constant danger of death and catastrophic injuries due to well fires. Every time a well is drilled, the pipes need to be removed so new drill bits can be used. Removing the pipes means gas can escape which can cause the fire. The oil and gas industry is putting procedures in place to check for gas leaks – but that still requires focused work and a lot of experience.

The Oklahoma City oilfield injury attorneys at Cunningham & Mears fight to hold oil field owners and other participants responsible if they fail to follow industry standards. Oil well fires can devastate families if a worker dies. Injured victims have the right to file personal injury claims on their behalf against third-parties. Victims may also be entitled to file a workers’ compensation case. To learn you rights, call our law office today at 405.212.9234 or complete our contact form.